Buying, and Karma, and Searching! Oh, my! 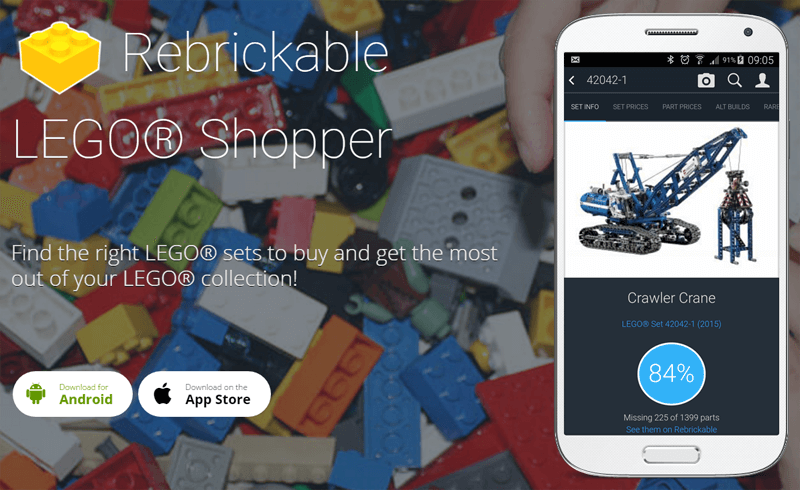 It's taken four months, an iMac for development, an iPad for testing, stealing my sister's iPhone for testing, incorporating a GST registered company, and one app store rejection, but I have finally managed to get the Rebrickable LEGO Shopper app into the Apple App Store! However, I had to rename it to Rebrickable Shopper for LEGO to make the Apple Review team happy :/

OK I lied, the iPad was for playing :)

The app is a LEGO shopping companion and it can help you decide if you should buy a particular LEGO set, or at least which LEGO set you should buy. Simply scan the barcode on a LEGO box (or enter it’s set number manually) and it will display several tabs of information to help you, some of which is new content not even available on Rebrickable.

In the last four months, 4000+ barcodes have been scanned by 600+ users of the Android version!

See the % of parts you already own in this set. If it’s a very high number you probably don’t need to buy it and might prefer to source the missing parts instead. This will use all your existing saved Build defaults and sets/parts list configuration.

See the known prices at other locations. Useful to get a feel for any “specials” the store might be claiming. I'm hoping to add more data sources to this shortly.

Based on hundreds of BrickOwl stores, the average prices for each part is added together to get an overall "part-out" price of the set. Useful if you are into that sort of thing.

A list of all the alternate build MOCs we have for the set. More MOCs = more value :)

See which parts in the set are rare. Currently, this means a part appears in 3 sets or less for that color.

Lists the top 10 most valuable parts within the set, again based on BrickOwl store prices.

This tab answers the question – what else can I build if I buy this set? In addition to the list of alt builds on the other tab, it will re-calculate your owned part % for every single set and show you which ones get the biggest improvements.

Some features require you to login to Rebrickable to work, but if for some crazy reason you don’t have an account the remaining features will work fine. 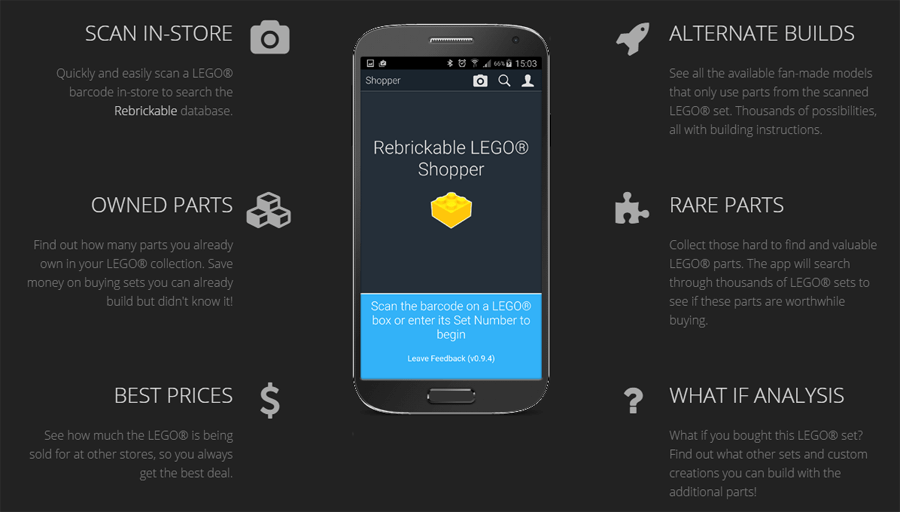 Similarly to the Android version, the iOS version is a paid app with no ads or in-app purchases or nags of any kind. Unlike Google, there is less flexibility with the Apple pricing structure so I chose the minimum price of USD $0.99. At current conversion rates and after Apple's 30% cut, I make about AUD 90c per install.

This is where I ask you to please support both Rebrickable and myself and give the app a go! I've poured my life into Rebrickable over the last 4 years (just ask my wife!), and would love to see some of that effort reflected in a successful app.

For those interested, I plan on posting a breakdown of the costs/revenue comparison for the Google/Apple stores - maybe in 6 months time. 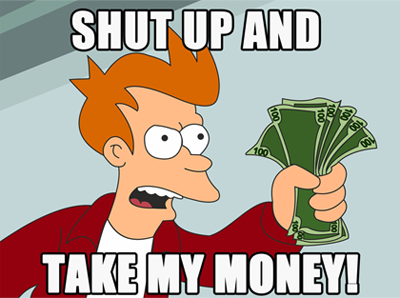 I’m always happy to hear feedback or suggestions anyone might have. There is a dedicated forum for the app, or if you prefer to leave anonymous feedback go here. If you do like the app, I’d love to get a 5 star review on the App Store. These ratings are essential for an app to stand any chance of becoming visible to general audiences through store or category listings. If you find a bug or issue please let me know via the forum/feedback and I'll do my best to fix it as soon as possible. I'm happy to hear feature suggestions too.

Of course, over time you can expect the functionality to grow and make the most of available features on Rebrickable as they are implemented.

It is currently available on Android and now iOS (maybe I'll release it on Windows later if it's financially viable).