Numbers time! Rebrickable has been running for five years now, and 2016 was an extremely busy time for me.

The below chart shows the daily page views for the last 5 years. There is always a surge of activity right after Christmas which eventually tapers off, but the overall trend shows some decent growth.

In 2016, about 40% of all traffic was from mobile devices (up from 35% in 2015 and 30% in 2014). This is a pretty obvious trend and something I've been working hard all year to address. Rebrickable was never built with mobiles/tablets in mind, so as announced previously I'm working on a complete rebuild that will be mobile friendly. I really really hope to get it into beta testing in January 2017.

Some numbers from Rebrickable:

I love my stats. To give you a taste of what it's like running this site, the first thing I do when I wake up in the mornings is to make sure the site is up and running ok. The below screenshot shows a typical snapshot of the Google Analytics real-time display of activity on the site. The number of concurrent active users tends to fluctuate between about 30 and 150. If it's at 0 I know something broke during the night :) 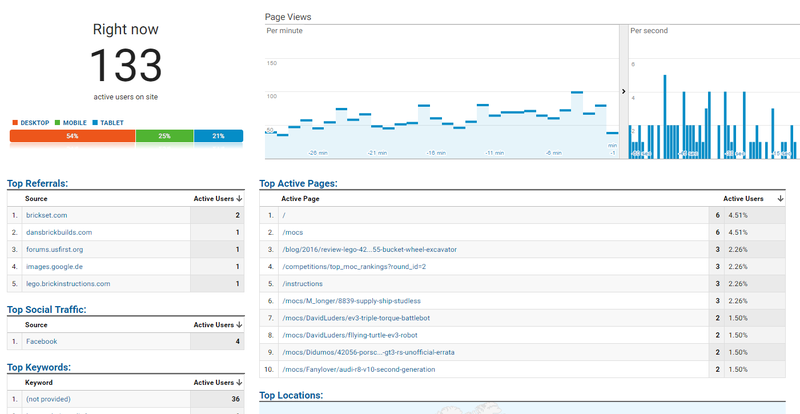 Another interesting chart that Google Analytics provides is the demographics data it collects (hint: Google knows *everything* about you!). The numbers seem to make sense from what I've observed.

LEGO Remake - July 2016 saw the launch of the LEGO Remake site, a joint venture between Rebrickable and The LEGO Group. It's had a bit of a slow start, but there will be plenty more content added next year.

Top MOC Competition - This competition ran every month to find the most liked MOCs and awarded a total of €1000 worth of LEGO prizes. A huge thank you to Kim Thomsen and the rest of the LEGO Community Engagement team for funding this competition.

Rebrickable v3 - I've been a bit absent this past year while trying to spend as much time as possible on getting the v3 site finished. It has been such a huge undertaking, but it will be ready within a month or two, so 2017 should be interesting! A big thank you to the admin team for ensuring all the inventories are accurate and putting up with me during this time :)

Rebrickable Shopper for iOS - In April this year, I released the Rebrickable Shopper app on iOS after releasing it on Android late last year. There was a brief legal issue with the name/logo that Kim Thomsen helped me resolve (thanks again!), but it is going strong. I hope to expand the app to add more features in 2017.