1:18 scale enclosed semi truck trailer in red. This is a model of a 53 foot trailer with a built in reefer. It is about 114 studs long, 18 studs wide, and 28 studs high. The trailer contains three PF M-motors operated via remote control.

An electrical tail light connection comes from the main tractor and is operated by remote control on/off.

A version without powerfunctions and without a liftgate is available here http://rebrickable.com/mocs/motomatt/118-scale-red-reefer-semi-truck-trailer-without-powerfunctio

This trailer is shown being pulled by my 1:18 model of a Kenworth T680 semi truck. Together the semi-truck and red reefer trailer are about 4 feet long.

Close to a year ago I built a rocky mountain double flat-bed trailer with an attached forklift. To tow it I built a model of a lego Kenworth T-680 in red, blue, and white, with a ginormous cab. Since the model mostly sits on a shelf, I always wanted to build a fully enclosed trailer to match the truck's high cabin design for a better side profile look. Well, finally after a long time accumulating 8x16 tiles, I finished it!

Overall, the trailer enclosure is pretty stable and not as fragile as I thought it would end up being. There's minimal flex in the frame and it looks pretty realistic.

To make a boring trailer a bit unique I wanted to add a retractable liftgate similar to the one in Madoca's wing body truck. I took the same liftgate design from my earlier B-train flat-bed trailer and mounted it on a pair of steering racks to hide and extend it. But the up/down operation is not always as smooth as the original one because it sometimes tends to catch a bit against the edges of the rear fender. I think the way to fix this would end up detracting a bit from the aesthetics of the rear, so I left it as-is.

Originally I was thinking to put the battery underneath the frame, but that would make it hard to turn it on or off while lifting up the trailer. So the battery sits as cargo inside the enclosed compartment and is easily reachable without moving the trailer off the ground.

After making the video from a vantage point at ground level, I noticed that the wheels of both the trailer and truck were quite cambered due to all the weight. I later improved on this by changing the way the axles are attached to the frame in both the truck and the trailer. The instructions and parts list includes a better design than what was used in the video.

These types of files are created with the LDraw system of software. You will need to install compatible software to open and view the instructions. A full list of available software is on the LDraw site. 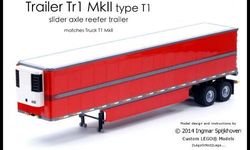 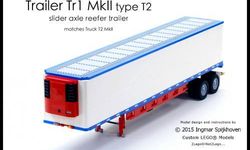 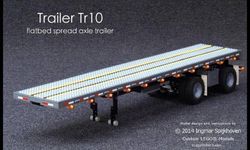 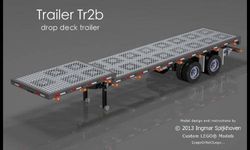 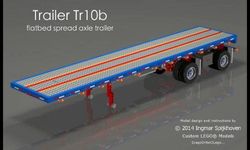 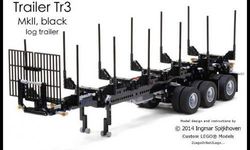 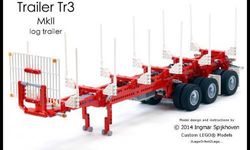 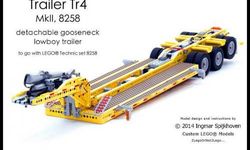 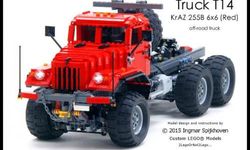